An epidemic of obesity is a chronic disease, similar to LDL cholesterol, spread globally including Canada. It is associated with excess body fat and is considered a Body Mass Index (BMI) of over 30.

According to a recently published report, 20% of Canadians over 18 (about 6 million adults) and 6% under 18 are obese. The obesity rate is also alarming for children and 1 out of 10 is obese. Both overweight and obesity are more common in males than in females.

Canada’s obesity issues have been growing steadily, and in some respects mirror the United States’ rates. Currently, 61.1% of Canada’s adults are either overweight or obese (compared with 66.6% of the United States’ adult population). The obesity rates are currently costing the economy roughly $4 Billion per year.

Currently, Canada ranks the 35th on the list of fattest countries (Forbes). And currently, researchers are predicting disaster in the coming decades: that 70% of 40-year-olds will be overweight or obese. This number is staggering and alarming. 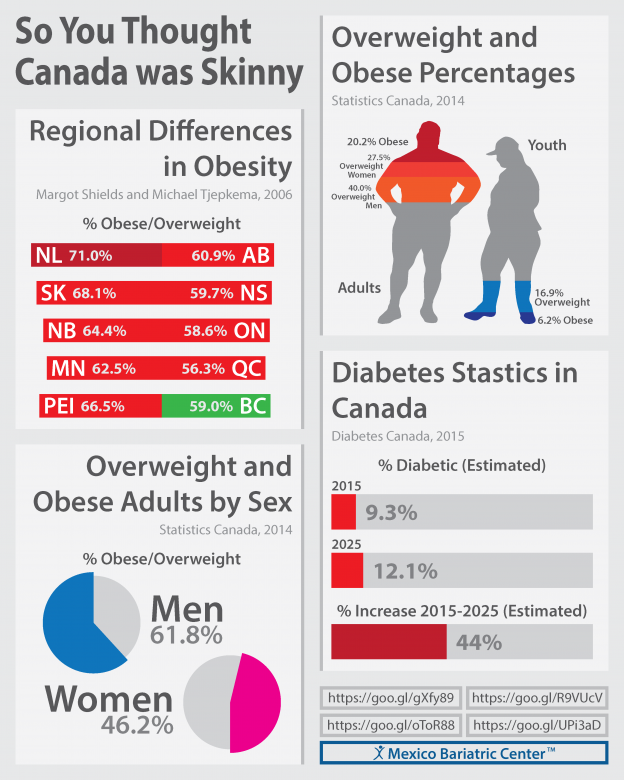 In order to stop the growing obesity epidemic, many family physicians are suggesting patients undergo bariatric surgery. Patients who have tried and failed to lose weight with traditional methods can undergo weight loss surgery.

The only proven long-term solution to cure obesity and obesity-related diseases is weight loss surgery. Surgery improves weight as well as overall life expectancy. Not to mention the cost of health care and lost productivity (estimated at $7.1 billion – 2016).

Most of the Weight loss surgery procedures are covered almost in all of Canada by Jurisdictional Health Care Plans. All are offered by the individual provincial government. However, the waitlist is too long (2 to 15 years). Atlantic provinces, in general, lag in access to bariatric surgeries.

* Yukon and the Northwest Territories do cover bariatric surgery but patients are referred to an affiliated province.

** Nunavut does not cover bariatric surgery

*** Non-invasive Intragastric Balloon is not covered

There are experienced and qualified surgeons available in Canada. The capacity of surgical treatment of obesity has increased as well. There were 6500 bariatric surgeries were performed in 2013-2014(4 times more in 7 years).

However, a very small percentage of eligible patients are offered surgery with an average waitlist of 5 years across the country. Canadian clinical practice guidelines for bariatric surgery qualifications are:

If one doesn’t want to wait to get the covered services(2 to 15 years). They can follow the viable options below:

Many patients from Canada start their journey to a new life with Mexico Bariatric Center (MBC) and change their lives forever. Patients from Canada opt for surgical treatment of obesity and give themselves a second chance in life.

Learn more about undergoing weight-loss surgery by visiting these pages on major cities in Canada.

To avoid the long wait time, the patients in Alberta have been taking advantage of Medical Tourism through Mexico Bariatric Center. By doing this they avoid a high cost of surgery or getting qualified under the guidelines. AHCIP even reimburses the surgery part of the bariatric procedures toll-free.

Mexico Bariatric Center has been actively educating and providing bariatric services to the province of Alberta. In 2016, MBC staff alongside MBC’s CEO, Ron Elli, Ph.D., and Dr. Louisiana Valenzuela held an informational seminar in Edmonton.

In 2017, the MBC crew directed by Ron Elli, Ph.D., and Dr. Louisiana Valenzuela traveled to Calgary. They educated patients about obesity and obesity-related disease. The seminar also emphasizes after-care. We do this to help patients establish the amount of food they eat and exercise for long-term weight loss success. 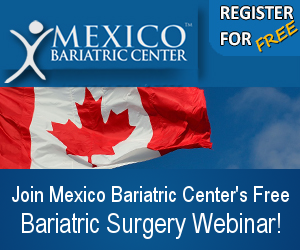